Previous parts in this series:
Part 1: A brief history
Part 2: First half of the Novus Ordo Mass

Following the Preparation of the Gifts is the most important part of the Mass, the Eucharistic Prayer. There are four Eucharistic Prayers to choose from. A few more have also been written and approved for use, including four Eucharistic Prayers “for various occasions.” In the Eucharistic Prayer, the bread and wine are offered to God, along with our contrite and devout hearts, and we participate in our Lord's sacrifice on the Cross. The priest begins by greeting the people and exhorting them to lift up their hearts to God in thanksgiving. This dialogue is identical to the one found in the traditional Latin Mass and dates back to the apostles.

Eucharistic Prayer II is somewhat shorter, and the GIRM recommends it for ferias (GIRM 365). It is theoretically based on the Eucharistic Prayer from the Apostolic Tradition of St. Hippolytus of Rome, which dates from the third century. However, at least at a cursory glance, the resemblance is practically nonexistent. It begins with the epiclesis, praying for the Holy Spirit to come upon the host and chalice and transform them into the Body and Blood of Christ. After a strange comparison between the Holy Spirit and dewfall, the priest makes a single Sign of the Cross over the host and chalice.

This is followed by the words of consecration, in which the priest quotes our Lord's words at the Last Supper and the bread and wine are transformed into the Body and Blood of Christ. First, he takes the bread in his hands.

The priest elevates the Sacred Host so that the faithful may look upon it and worship it. The bell is rung, and the Host is incensed. After the elevation, the priest replaces the Host on the paten and genuflects in adoration. He then takes the chalice of wine.

The priest elevates the Chalice. After setting it down and genuflecting, he says, “The mystery of faith.” The people respond with one of three possible acclamations, expressing our faith in Christ's Death and Resurrection.

The priest continues with the anamnesis, or remembrance of the Passion, Resurrection, and Ascension of Christ, and the oblation of the Host and Chalice to God. Only now, after the consecrations, is there any mention of an oblation, and it is still only a minimal mention.

The priest then prays that all may receive the benefits of the Holy Sacrifice of the Mass before praying for Holy Mother Church, with special mention of the Pope and the local bishop.

Next, the priest prays for the poor souls suffering in purgatory before asking God's mercy for all of us, through the intercession of the saints. This prayer is analogous to the two prayers Memento etiam Domine and Nobis quoque peccatoribus in the Roman Canon.

Pictured here is the minor elevation at a typical Novus Ordo Mass. 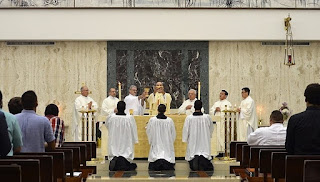 Eucharistic Prayer IV is not commonly used, nor are any of the other Eucharist Prayers that have been approved. After the Eucharistic Prayer, the priest introduces the Our Father, which is sung by everyone together. Thus, after we have participated in our Lord's sacrifice on the Cross and made present his most sacred Body, Blood, Soul, and Divinity, we respond with the prayer that our Lord Jesus Christ himself taught us.

As in the traditional form of the Mass, the priest elaborates a little on the final line of the Our Father, “But deliver us from evil.” However, the elaboration (or “embolism”) in the Novus Ordo is much shorter and does not mention any saints. The priest sings it aloud.

The priest then sings the first of the three prayers before Communion from the traditional Mass, the prayer for peace. As we prepare to receive Communion, we pray for the divine peace that comes from God's grace. This prayer quotes our Lord's words in John 14:27.

Our Lord commanded us to make peace with our brother before offering our sacrifice at the altar. Thus, before receiving Communion, we offer our brethren the Kiss of Peace. The priest offers the peace of the risen Christ to the faithful, and the deacon invites us to share that peace with each other.

The practice of actually kissing each other ended in the Middle Ages and was replaced with a reverent embrace to symbolize the sharing of God's peace. Today, handshakes are common. The GIRM prescribes that the sign of peace be offered “in a sober manner” and “only to those who are nearest” (82).

Once the sign of God's peace has been offered, the priest breaks the Sacred Host, as Christ did at the Last Supper to symbolize the breaking of his Body at his Crucifixion. He then breaks off a small particle of the Host and places it in the Chalice, accompanied by a silent prayer.

The choir then sings the Agnus Dei, addressing our Lord as the “Lamb of God, who takes away the sins of the world,” just as St. John the Baptist did when he first heralded our Lord's arrival (John 1:29).

Meanwhile, the priest continues his preparation for Holy Communion. He chooses one of the two remaining prayers before Communion from the traditional Mass—the prayer for holiness or the prayer for grace. Both prayers are beautiful and ancient.

To the cry of St. John the Baptist, “Behold the Lamb of God! Behold him who takes away the sins of the world!” (John 1:29) the Church adds the words of an angel in Apocalypse 19:9, “Blessed are those called to the supper of the Lamb.” With these words, the Holy Sacrifice of the Mass, the closest we can be to God on earth, is compared to the eternal wedding feast of the Lamb that we hope to enjoy in heaven. The priest and faithful together respond with the prayer of the centurion from Matthew 8:8, said only once.

The priest, deacon, servers, and all of the faithful who are properly prepared then receive our Lord in Holy Communion. To be properly prepared to receive Communion, one must be a practicing Catholic in a state of sanctifying grace and have been fasting for at least one hour prior to receiving Communion. It is laudable to observe the more traditional practice of fasting for three hours or from midnight. Lay people may be appointed by the pastor as Extraordinary Ministers of Holy Communion (sometimes incorrectly called “Eucharistic Ministers”) to assist in the distribution of Communion.

When the priest receives Communion, he says a couple very short prayers.

Communion is given to the people with even simpler words.

During the distribution of Holy Communion, the choir sings the Communion Chant, which, like the Entrance and Offertory Chants, is proper to the day, is usually taken from a psalm, and may be replaced with another liturgical chant. After Communion, the priest or deacon uses unconsecrated wine and water to purify all vessels used to contain the Blessed Sacrament. Because every particle of the Host and every drop of the Precious Blood is our Lord Jesus Christ, whole and entire, extreme care must be taken to ensure that none of it is profaned. Meanwhile, the priest silently prays that all may receive the benefits of Holy Communion.

The priest then returns to the chair. Another hymn may be sung. There is also a period of silent prayer after Communion to allow the faithful to give thanks to God for the immense gift he has given us in Communion. The priest then sings, “Let us pray,” followed by the Postcommunion or “Prayer After Communion,” which is proper to the day. Brief announcements may then be made.

Thus concludes the Liturgy of the Eucharist, in which we offered the Holy Sacrifice and received the Blessed Sacrament. What follows are the Concluding Rites, the fourth and final major part of the Mass. Before dismissing the people, the priest gives the last blessing.

On certain occasions, a longer, more solemn blessing is given. The deacon then dismisses the people with one of four forms.

Now that we have united ourselves to God in the Mass, we go forth into the world to carry out the work of the Church. With the dismissal, the Novus Ordo Mass is ended. The Last Gospel and Leonine Prayers, which conclude the traditional Latin Mass, are never used in the Novus Ordo.