Exaltation of the Holy Cross

Today, September 14, we celebrate the feast of the Exaltation of the Holy Cross. There is still the usual Friday obligation of abstinence from meat or an equivalent act of penance.

The Crucifixion of our Lord Jesus Christ is the central event of Christianity. Through our Lord's suffering and death on the holy Cross, he brought the old law to fulfillment and made the ultimate atonement for our sins. Through his glorious Resurrection, he gave us the hope of eternal life. The Cross is the instrument through which our salvation was won. For this reason, the Cross is the symbol of Christianity. Every altar has a crucifix on or behind it. One of the most basic signs of reverence is making the Sign of the Cross on ourselves. Whenever a priest gives a blessing, he does so with the Sign of the Cross. St. Paul wrote in Galatians 6:14, “But God forbid that I should glory, save in the cross of our Lord Jesus Christ; by whom the world is crucified to me, and I to the world.” 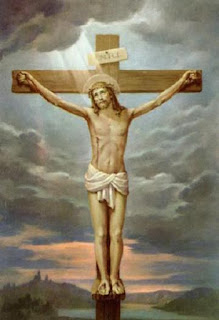 A cross is an extremely basic symbol—just two lines at a right angle—and so it has been used in some form since the beginning of recorded human history. In addition, since the beginning of history, the cross has always had some sort of religious significance, even for primitive pagan religions. One of the earliest forms of the cross is the swastika, a cross with each arm bent at a right angle. The swastika is used as a sacred symbol in India and some other places in the Orient, primarily by Hindus and Buddhists. It represents fire and the sun. In ancient Egypt, there was a form of the cross called the ankh or crux ansata (“cross with a handle”), which resembled a cross with the top arm replaced by a loop: ☥. This form of the cross was used as a hieroglyphic symbol for life and strength. It is still used by some Coptic Christians in Egypt. Meanwhile, in ancient Greece, a cross resembling the familiar Christian cross was used as a sacred symbol in burial rituals. Perhaps these ancient, pre-Christian uses of the cross were a foreshadowing by divine providence of the Crucifixion of Jesus Christ.

Finally, the cross was used by the ancient Romans as a means of execution. Crucifixion was the most cruel punishment imaginable, and it was reserved for the worst of the worst. It was originally a punishment for slaves. The ancient Roman orator Cicero called it “servitutis extremum summumque supplicium,” meaning, “the final and most terrible punishment of slaves.” If a slave murdered his master, then all of that master's slaves would be crucified. In at least one case, four hundred slaves were crucified at once, including women and children. Later, crucifixion was also administered to the lowest classes of free people who were accused of serious crimes. It was never inflicted on a Roman citizen. Part of the point of crucifixion was to put the victim on display and deter others from committing similar crimes. Cicero called it “a most cruel and disgusting punishment” and said, “The very mention of the cross should be far removed not only from a Roman citizen's body, but from his mind, his eyes, his ears.”

Crucifixion continued in the Roman Empire until it was abolished in AD 337 by Emperor Constantine the Great, who also legalized Christianity in the Roman Empire. However, in Islam, crucifixion is prescribed as a punishment in the Quran (5:33), so it remains a legal form of execution in some Islamic states, including Saudi Arabia, Iran, and Sudan.

The legend of the True Cross
In the thirteenth century, Blessed Jacobus de Varagine wrote the Golden Legend, a compilation of legends about saints, feasts, relics, and biblical events. It includes the legends of how the Cross came to be. According to the Golden Legend, when Adam, the first man, was sick, his third son, Seth, returned to the Garden of Eden to acquire the oil of mercy with which to anoint Adam. At the entrance to the Garden of Eden, Seth found St. Michael the Archangel guarding the entrance, who said, “Travail not thou in vain for this oil, for thou mayst not have it till five thousand and five hundred years be past.” The 5,500 years refer to the institution of the New Covenant. Instead, St. Michael gave Seth three seeds from the Tree of Knowledge of Good and Evil. Seth planted these seeds in Adam's mouth when he was buried at the hill of Calvary. The trees that grew from these seeds still existed centuries later, when the Queen of Sheba visited King Solomon. The Queen declared that these trees would bring about the salvation of the world. The Romans built the True Cross from these trees, the offspring of the Tree of Knowledge of Good and Evil. Thus, according to this medieval legend, the same tree that brought about the fall of mankind also brought about the salvation of mankind. Although it is a lovely story, there is absolutely no authority to it, and it first appeared in the Middle Ages.

The finding of the True Cross
In AD 326, St. Helena, mother of Emperor Constantine the Great, traveled to Jerusalem in search of the True Cross on which Jesus died. It had been buried by the Jews so that no Christians could come and worship it. However, one Jew named Judas defected and gave St. Helena the location of the True Cross. When he did this, according to the Golden Legend, the devil cried out, “Judas, what hast thou done? Thou hast done the contrary that the other Judas did, for by him I have won nany souls, and by thee I shall lose many, by him I reigned on the people, and by thee I have lost my realm, nevertheless I shall yield to thee this bounty, for I shall send one that shall punish thee.” Judas was later baptized and became St. Cyriacus.

St. Helena discovered three crosses, and, at the order of St. Macarius, Bishop of Jerusalem, she brought them to the home of a gravely ill woman. The woman touched all three crosses. Two of them had no effect, but the third one healed her the instant she touched it. St. Helena knew that this third cross was the True Cross. From the seventh century until 1960, the feast of the Invention of the Holy Cross, celebrating St. Helena's discovery, was celebrated on May 3. St. Helena and Emperor Constantine built the Church of the Holy Sepulchre over the hill of Calvary where the Cross was found. The Church of the Holy Sepulchre was consecrated over two days, September 13 and 14, AD 335. This is the origin of the feast of the Exaltation of the Holy Cross on September 14.

Returning the Cross to Jerusalem from Persia
In AD 614, King Chosroes of Persia raided Jerusalem, murdered thousands of Christians, and took the True Cross to Persia. Fourteen years later, in AD 628, the Christian Emperor Heraclius defeated King Chosroes and sought to restore the True Cross to Jerusalem. The next year, he arrived in Jerusalem with the True Cross and came to the hill of Calvary, adorned as an emperor with gold and jewels. However, he was unable to carry the Cross up the hill. God held him back. Bishop Zacharias, the Patriarch of Jerusalem, told him, “See, O Emperor, that it be not that in carrying the Cross attired in the guise of a Conqueror thou showest too little of the poverty and lowliness of Jesus Christ.” Emperor Heraclius took off his imperial adornments and his shoes. Dressed as a humble peasant, he carried the Cross up the hill and planted it in its rightful place on the hill of Calvary on September 14, AD 629, on the 294th anniversary of the consecration of the Church of the Holy Sepulchre. Since then, the feast of the Exaltation of the Holy Cross has been celebrated by the whole Church on September 14.

Liturgy of the feast of the Exaltation of the Holy Cross
At Matins and Lauds on this day, we sing the hymn Pange lingua gloriosi, composed by St. Venantius Fortunatus in the seventh century. It is not to be confused with another hymn, also called Pange lingua gloriosi, composed by St. Thomas Aquinas in the thirteenth century. The hymn by St. Venantius Fortunatus consists of ten stanzas. The first five plus a doxology are sung at Matins, and the next five plus a doxology are sung at Lauds. The entire hymn is also sung at the Adoration of the Cross on Good Friday. It sings of our Lord's triumph over sin and death through the power of the Cross.

The readings from the first nocturn of Matins are from Numbers 21:1-9. In the first reading, Numbers 21:1-3, the Lord destroys all enemies of Israel. In the second reading, Numbers 21:4-6, the people begin to doubt God and have little faith that God would care for them, so as a punishment, God sends venomous snakes to bite and kill them. In the third reading, Numbers 21:6-9, God commands Moses to make a bronze serpent so that all who look upon this bronze serpent could be cured. This bronze serpent foreshadows the Holy Cross. In John 3:14, Jesus says, “As Moses lifted up the serpent in the desert, so must the Son of man be lifted up.” In the second nocturn, the readings tell the story of the True Cross's return from Persia by Emperor Heraclius, as described above. Finally, in the third nocturn, the readings are from St. Leo the Great's eighth sermon on the Passion of Christ.

At Mass, the Epistle is taken from Philippians 2:5-11. In this passage, St. Paul writes of Jesus's humility and his ultimate triumph over the Cross. Because of this triumph over the Cross, the Name of Jesus is exalted above every other name. All genuflect in adoration of the Holy Name of Jesus when the subdeacon sings the words, “Ut in nomine Iesu omne genu flectátur coeléstium, terréstrium et infernórum” (“So that at the name of Jesus every knee should bend of those in heaven, on earth and under the earth”).

The Gradual is taken from Philippians 2:8-9, two verses from the Epistle we just heard. The Alleluia verse is paraphrased from the hymn Pange lingua gloriosi from Lauds.

The Gospel is taken from John 12:31-36, in which Jesus foretells his Passion and Death on the Cross. He declares that he will be lifted up from the earth and will draw all things to himself through the Cross.

Thus, through this beautiful and sacred liturgy, the Catholic Church venerates and adores the Holy Cross, on which our salvation was purchased.