The Seven Sacraments and Their Liturgies, Part 3: Confirmation

Previous parts in this series:
Part 1: Introduction to the Sacraments
Part 2: Baptism

Confirmation is the Catholic coming-of-age ritual. Coming-of-age and the transition into adulthood is a defining part of every person's life. Every religion and culture in human history has had some sort of ritual to mark it. St. Paul writes in his First Epistle to the Corinthians (13:11), “When I was a child, I spoke as a child, I understood as a child, I thought as a child. But when I became a man, I put away the things of a child.” In Catholicism, this transition from childhood into adulthood is marked by the sacrament of Confirmation. In Confirmation, we make the adult decision to follow Jesus Christ in his Church, and we are sealed with the gift of Holy Spirit. It is the consummation of God's work in our souls that began at Baptism. In addition to a great increase in sanctifying grace, we receive sacramental graces that help us resist the evils of the world, hold strong in our faith, discern God's will for us, and remain faithful and devout Catholics into adulthood. Confirmation makes us closer to the divine perfection that Jesus commanded of us (Matthew 5:48).

Like all of the sacraments, Confirmation was instituted by God. Jesus promised it to us when he said, “It is expedient to you that I go: for if I go not, the Paraclete will not come to you; but if I go, I will send him to you” (John 16:7). Jesus refers to the Holy Ghost as the “Paraclete,” which means “advocate” or “helper.” The apostles administered the sacrament of Confirmation to those who had previously been baptized, as recorded in the Acts of the Apostles (8:14-17, 19:5-6). In Apocalypse 9:4, we read that the locusts from the bottomless pit could not harm those who had the sign of God on their foreheads. This sign of God is the sacrament of Confirmation. Thus, Confirmation is a sacrament instituted by God for our salvation.

The age of Confirmation has varied throughout the centuries. In some times and places, it was given in infancy, shortly after Baptism, because it was viewed merely as the completion of Baptism and not as a coming-of-age ritual. This is still common practice in the Eastern Churches. However, St. Thomas Aquinas writes of Confirmation as a coming-of-age ritual (Summa Theologiæ IIIa, Q. 72, A.1). Confirmation generally occurs no younger than age seven, which is approximately the age at which children attain the use of reason. Until 1932, children were always confirmed before receiving their first Holy Communion. In more recent times, children are often confirmed during their teenage years. Like Baptism, Confirmation makes an indelible mark on the soul, so it can only be received once in a lifetime. It is customary to take on the name of a saint at Confirmation, known as one's Confirmation name. In some cultures, a person's Confirmation name may be added between his middle and last names.

Confirmation does not have a strict essential form like Baptism does, because Jesus did not give us a specific form for Confirmation. Any words approved by the Church can constitute a valid form for Confirmation. The essential matter of the sacrament is the anointing with Sacred Chrism, the same type of consecrated oil used at Baptism. The ordinary minister of Confirmation is a bishop. When Confirmation is described in the Bible, it is always performed by the apostles, whereas Baptism might be performed by deacons or other people. Thus, it has always been the sacred tradition of the Church that Confirmation be administered by a bishop, since bishops are successors to the apostles. However, if necessary, the bishop may give a priest permission to administer Confirmation as an extraordinary minister.

The bishop who administers Confirmation wears certain vestments proper to the order of bishop. The liturgical color for Confirmation is always white. He wears the amice, alb, cincture, stole, and cope. A bishop wears the stole straight down on both sides, not crossed. He also wears the pontifical stockings and sandals, which are specially adorned footwear in the color of the day. The bishop also wears the pectoral cross, a gold cross (not a crucifix) worn on a green and gold cord around his neck. If the bishop is a cardinal, the cord is red and gold. On his head, he wears the golden mitre, a large shield-shaped hat with two lappets hanging down in the back. Finally, if he is the bishop with jurisdiction over that place, he will carry a crozier, a symbol of this authority that resembles a shepherd's staff. When a simple priest administers Confirmation, he wears surplice, stole, and cope. Illustrated below is a bishop vested for Confirmation, with mitre and crozier. 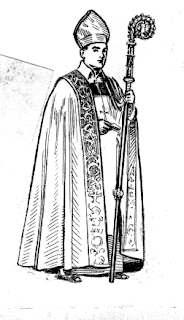 The rite for Confirmation is found in the Roman Pontifical. Because the form of Confirmation is not as definite as Baptism, the bishop begins by instructing those being confirmed (the confirmandi) that they must not leave the church until the ceremony is finished in order to ensure validity of the sacrament. The confirmandi kneel at the altar rail. Each confirmand has a sponsor, who has a similar function to the godparents at Baptism. The bishop begins with a blessing, invoking the Holy Ghost.

This leads into the first imposition of hands and prayer. The imposition or laying on of hands is an essential part of the sacrament (Hebrews 6:2). It occurs twice. For the first imposition of hands, the bishop extends his hands over all of the confirmandi and sings a prayer, asking God to bestow upon the confirmandi the seven gifts of the Holy Ghost. These seven gifts, enumerated in Isaiah 11:2, are wisdom, understanding, counsel, fortitude, knowledge, piety, and fear of the Lord.

When he says, “In the name of the Father...” he makes the Sign of the Cross three times over the confirmand. This form has three parts.

Second, he says, “I confirm thee with the Chrism of salvation.” Chrism is the visible matter of the sacrament, the outward sign by which we receive the grace of Confirmation. It is made from olive oil mixed with the sweet perfume of balsam. The use of balsam comes from the balm of Gilead, a medicinal plant mentioned several times in the Old Testament (Genesis 37:25, 3 Kings 10:10, Jeremiah 8:22, Ezekiel 27:17).

Finally, “In the name of the Father, and of the Son, and of the Holy Spirit.” The sacrament of Confirmation completes the work that began at Baptism, also administered in the name of the Holy Trinity, and it confers the fullness of spiritual strength and sanctification, which comes from the entire Trinity. Therefore, the names of the three persons of the Trinity are mentioned at Confirmation like at Baptism.

After the bishop says this, he slaps the confirmand in the face. (The official rubric says that he “strikes him lightly on the cheek.” Rumor has it that the boys get slapped a little harder than the girls.) This liturgical slap originated in the thirteenth century. It is a sign that the confirmand is now a fully initiated member of the Church Militant and must be ready to suffer for Christ (Matthew 10:38, 1 Peter 4:13‑16). As the bishop does so, he offers the greeting of the risen Christ (John 20:19), also used several times in the ceremony of Baptism.

When all have been confirmed, the bishop washes his hands, and the choir sings Psalm 67:29‑30, which foreshadows the sacrament of Confirmation.

The bishop sings a final prayer for the confirmandi, preceded by a few versicles and responses.

The conclusion of the liturgy of Confirmation is taken from Psalm 127. Psalm 127 is one of the fifteen Gradual Psalms from the worship of the Jewish Temple and describes how blessed those who follow God are. In this context, it describes the blessedness of those who have just been confirmed. First, the bishop says Psalm 127:4.

He then gives the confirmandi a final blessing in the words of Psalm 127:5.

The bishop then preaches to the confirmandi and admonishes them to hold strong to their faith. He says the Apostles' Creed, Our Father, and Hail Mary with them. Usually, this liturgy is followed by the Holy Sacrifice of the Mass, offered by the bishop. Thus, the first thing the confirmandi do as fully initiated, mature Catholics is assist in the sacrifice of Calvary. In the analogy of the Church Militant, comparing the Church on earth to a military in the war against Satan, Confirmation is like boot camp. Once we have been confirmed and sealed with the Holy Spirit, we are ready to take on anything.

Email ThisBlogThis!Share to TwitterShare to FacebookShare to Pinterest
Labels: The Seven Sacraments and Their Liturgies