The Seven Sacraments and Their Liturgies, Part 5: Penance

Our goal is to always do God's will and to never sin. Unfortunately, we are weak and imperfect humans, and we will inevitably fall into sin. Our sins offend God and make us unworthy to receive his grace. Fortunately, God still loves us and has perfect mercy. Thus, he instituted the sacrament of Penance. In Penance, we confess our sins privately to a priest, and he gives absolution. Through absolution, all of the eternal consequences of our sins are absolved and washed away completely. God's sanctifying grace is returned to our souls, allowing us to come back into God's good favor and regain the hope of salvation. Our souls are healed.

The sacrament of Penance originated from the sin offerings of the Old Covenant. Jews who comitted sins were required to go to a priest to confess their sins and make a burnt offering for them (Leviticus 5:4-6). In the New Covenant, we go to a priest to confess our sins and partake of the sacrifice of the Cross. In John 20:21-23, Jesus gave his apostles the power to absolve sins, saying, “Whose sins you shall forgive, they are forgiven them; and whose sins you shall retain, they are retained.” Acts 19:18 mentions people coming to the apostles to confess their sins. In 2 Corinthians 2:10, St. Paul writes about having the power to pardon sins. Throughout Church history, Catholics have come to priests to confess their sins and receive absolution. St. Augustine wrote in the fourth century:

All mortal sins are to be submitted to the keys of the Church and all can be forgiven; but recourse to these keys is the only, the necessary, and the certain way to forgiveness. Unless those who are guilty of grievous sin have recourse to the power of the keys, they cannot hope for eternal salvation. Open your lips, then, and confess your sins to the priest. Confession alone is the true gate to Heaven.

Penance is unique amongst the sacraments in that it is always celebrated privately. The liturgy through which Penance is celebrated is known as confession. Confessions are typically heard in a confessional, a small, private booth that accommodates the priest, known as the confessor, and the person making the confession, known as the penitent. Every church has at least one confessional, and many have multiple confessionals, usually along the sides of the church or in the back. The confessional is designed to be as private and soundproof as reasonably possible. There are usually lights above the confessional that indicate when it is occupied. The priest is usually behind a screen, so that he cannot see the penitent but can hear his voice. Pictured below is a row of confessionals at the Cathedral of Santiago de Compostela in Spain. 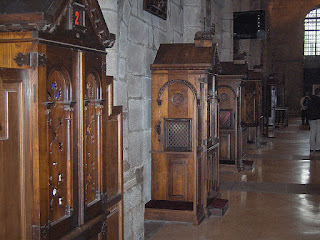 In order to make a good confession, we must first make an examination of conscience to identify which sins we have committed and need to confess. Furthermore, we must truly be contrite for our sins. Being sorry for our sins is a decision, not an emotion. We must decide that we regret having offended God. Furthermore, we must make a firm resolution to amend our lives to avoid sinning in the future. We strive for perfect contrition, which is being sorry for our sins purely because they have offended God. However, it is sufficient to have imperfect contrition, which means being sorry for our sins because we want to go to heaven instead of hell. It is very easy to go to confession with the subconscious intent of returning to sin, but this is damaging to our souls. We must firmly intend to never sin again. Without contrition, we do not receive the graces of confession. Confession is not a license to sin again any more than medical treatment is a license to get sick again. Rather, confession is a sacrament of healing to help us to never sin again. When Jesus saved the adulteress (traditionally identified as St. Mary Magdalene) from being stoned, he told her, “Go, and sin no more” (John 8:11).

The priest hearing the confession wears a surplice and purple stole. The penitent kneels in the confessional, makes the Sign of the Cross, and says, “Bless me, Father, for I have sinned.” Everything is in English except the prayer of absolution. The penitent tells the priest how long it has been since his last confession. The priest may give him a blessing. The penitent then tells the priest what sins he has committed and how many times. He should give the necessary details that affect the severity of the sin, but should not give excessive detail. If he has committed mortal sins, then he must confess them. Deliberately leaving out mortal sins is called making a bad confession. It is itself a mortal sin and invalidates the sacrament.

When the penitent has confessed his sins, the priest gives some counseling to help the penitent avoid repeating these sins. He assigns a penance, something to do in reparation for the sins. This may take the form of certain prayers, charitable acts, or acts of fasting and self-denial. The penance does not make up for our sins, because only Jesus's sacrifice on the Cross does that. Instead, its purpose is to show God that we are willing to make reparations for having offended him. Deliberately refusing to do the penance that the priest has assigned is a mortal sin.

Next, the penitent makes an act of contrition, a prayer telling God that we are sorry for our sins. The most common act of contrition in English is, “O my God, I am heartily sorry for having offended thee, and I detest all my sins because I dread the loss of heaven and the pains of hell, but most of all because they offend thee, my God, who art all good and deserving of all my love. I firmly resolve, with the help of thy grace, to confess my sins, to do penance, and to amend my life. Amen.”

Finally, the priest gives the penitent absolution from his sins. The form of absolution is found in the Roman Ritual. It is always said in Latin. The priest may begin saying it while the penitent says the act of contrition. It begins with the two prayers said after the Confiteor at Mass and at Compline.

The next prayer contains the essential form of the sacrament. The priest keeps his hand extended. If the penitent is a priest, the priest says, “From every bond of excommunication, suspension, and interdict.” Otherwise, he omits the word “suspension,” since suspension is a penalty that can only be applied to a priest. When he says, “In the name of the Father...” he makes the Sign of the Cross over the penitent.

If the priest judges that the penitent is not truly contrite, or if the penitent refuses to accept the assigned penance, then he can refuse to give absolution. In addition, some offenses carry a penalty of excommunication that can only be absolved by a bishop, or even by the Pope. Examples of such offenses include using physical force against the Pope or deliberately profaning the Blessed Sacrament. Until 2015, procuring an abortion could only be absolved by a bishop or a by priest who had the bishop's permission. In 2015, Pope Francis gave all priests the power to absolve the sin of abortion.

The priest adds one more prayer for the pardon of the penitent's sins, appealing to our Lord's sacrifice on the Cross and the merits of the saints. This prayer is often said in English.

After he has said that prayer, the priest dismisses the penitent, saying, “Go in peace; your sins are forgiven.” The penitent's sins are now completely forgiven, and all of the sanctifying grace that he had lost through those sins is restored.

Email ThisBlogThis!Share to TwitterShare to FacebookShare to Pinterest
Labels: The Seven Sacraments and Their Liturgies