Over the course of the year, the Catholic Church has a lot to celebrate – the great works of our Lord, the Blessed Virgin Mary, and thousands of saints. Thus, there is a complex calendar used to determine what is celebrated in the Mass and Divine Office on each particular day. The liturgical calendar is really two calendars superimposed on each other. The proper of the time, or proprium de tempore, consists of seven major liturgical seasons and revolves around the principal feasts of Christmas, Easter, and Pentecost. The proper of the saints, or proprium sanctorum, consists of all of the feasts of saints fixed to dates on the Gregorian calendar (which itself is named after Pope Gregory XIII, who introduced it in 1582).

There is a complex set of rules to determine what is celebrated on a particular date, whether it be from the proprium de tempore or the proprium sanctorum, and what is commemorated. These rules have changed a lot over the first half of the twentieth century. The Calendar of the Council of Trent categorized feasts into “doubles,” “semidoubles,” and “simples.” This calendar got increasingly more complicated over the next few centuries. In the somewhat simpler 1960 General Roman Calendar, used in traditional Catholic parishes today, all liturgical days are designated first class, second class, third class, or fourth class. In general, first class days take precedence over second class days, which take precedence over third class days, which take precedence over fourth class days.

The proper of the time begins with the season of Advent, which prepares us for Christmas. The First Sunday of Advent is always the Sunday that falls between November 27 and December 3. Advent is a penitential season. The liturgical color is violet, the color of penitential occasions, and the Gloria is not sung at Mass. However, the Third Sunday of Advent is slightly more joyful. It is known as Gaudete Sunday, after the first word of its Introit, and the liturgical color is rose, a combination of violet and white.

The four Sundays of Advent are all of the first class. The weekdays, or ferias, of Advent, are mostly of the third class. The Wednesday, Friday, and Saturday following Gaudete Sunday are the Advent Ember Days. Ember Days occur four times a year and are traditionally observed by fasting and prayer to thank God for the gifts of nature. They are known in Latin as the jejunia quattuor temporum, or “fasts of the four seasons.” Ember Days are of the second class. Finally, for the last week leading up to Christmas Eve, December 17 to 23, the ferias are of the second class, and are observed with special antiphons at Vespers of the Divine Office.

Advent leads up to Christmas, one of the principal feasts of the year, celebrating our Lord's birth in Bethlehem. It is, of course, a feast of the first class, and it is preceded by a vigil of the first class on December 24. A vigil is a liturgical day preceding and preparing for a great feast. Furthermore, the celebration of Christmas is continued during its octave, the eight days starting on the feast that prolong the celebration of the feast. The days within the octave are of the second class. Christmas is also the beginning of the season of Christmastide. The liturgical color for Christmastide is white, the color of joyful feasts. The eighth day of the octave or one week after the feast is known as the “octave day.” The Octave Day of Christmas, January 1, is the feast of the Circumcision of our Lord. Several important feasts from the proper of the saints occur during the Octave of Christmas, including St. Stephen, Protomartyr, on December 26; St. John, Apostle and Evangelist, on December 27; and the Holy Innocents on December 28.

The Wednesday following Quinquagesima Sunday is Ash Wednesday, the beginning of the season of Lent. Lent is known in Latin as Quadragesima, which means “forty,” because the fast of Lent lasts forty days, not counting Sundays, from Ash Wednesday until Easter. Ash Wednesday is a first class day, and the Sundays of Lent are of the first class. Ferias during Lent are of the third class. Lent is the Church's most important time of fasting and penance, representing our Lord's forty days of fasting in the wilderness. During Lent, the liturgical color is violet, there is no Gloria at Mass, the Alleluia verse is replaced by a Tract, and the organ is not played except to assist the singers. The Wednesday, Friday, and Saturday following the First Sunday of Lent are the Lenten Ember Days. The Fourth Sunday of Lent is known as Laetare Sunday, from the first word of its Introit. Like Gaudete Sunday in Advent, Laetare Sunday has a slightly more joyful nature. The liturgical color is rose, and the organ is played.

The final two weeks of Lent are known as Passiontide, which takes on an even more sorrowful character than Lent. During Passiontide, all of the crucifixes and statues in the church are veiled, and Psalm 42 is omitted from the Prayers at the Foot of the Altar. The second week of Passiontide, the week before Easter, is known as Holy Week, which is observed by very special and ancient ceremonies. All of the days of Holy Week are of the first class. The final three days of Holy Week – Holy Thursday, Good Friday, and Holy Saturday – are known as the Sacred Triduum, which is the most sacred time of year for Catholics.

This brings us to Easter, the greatest feast of the year! Easter celebrates Jesus's Resurrection from the dead and is celebrated on the Sunday following the first full moon of spring. It could be as early as March 22 or as late as April 25. Easter and all of the days within its octave are of the first class, and the liturgical color is white. The Octave Day of Easter is also called Low Sunday, Quasimodo Sunday (after the first word of its Introit), dominica in albis (“Sunday in white”), or, more recently, Divine Mercy Sunday. The season of Eastertide or Paschaltide lasts fifty days from Easter to the Day of Pentecost. With the exception of Easter Sunday and Low Sunday, the Sundays of Eastertide are of the second class, and ferias are of the fourth class. Since it is such a joyful occasion, the Gloria is sung at Mass every day during Eastertide, even on ferias.

Forty days after Easter, on a Thursday, is the feast of the Ascension of our Lord, celebrating Jesus's Ascension into heaven. April 25 and the three days before the Ascension are the Rogation Days, observed by singing the Litany of the Saints and blessing the fields to pray for a fruitful harvest. Ten days after Ascension, the Sunday seven weeks after Easter, is Pentecost, one of the principal feasts of the year. Pentecost celebrates the descent of the Holy Spirit upon the apostles and the birth of the Catholic Church. Pentecost and all of the days within its octave are of the first class, and the liturgical color is red, symbolizing the fire of the Holy Spirit. The Wednesday, Friday, and Saturday of the Octave of Pentecost are Ember Days. The Octave Day of Pentecost is the feast of the Most Holy Trinity. The following Thursday is the feast of Corpus Christi, and Friday of the following week is the feast of the Sacred Heart of Jesus, the last feast whose date depends on that of Easter.

The rest of the year, until the next First Sunday of Advent, is the season after Pentecost. This season lasts for most of the summer and fall. Like the season after Epiphany, there is no special observance, the liturgical color is green, Sundays are of the second class, and ferias are of the fourth class. The Wednesday, Friday, and Saturday of the week following September 14 (the feast of the Exaltation of the Holy Cross) are Ember Days. The penultimate Sunday of October is World Mission Sunday, observed by a commemoration at Mass for the propagation of the faith. The last Sunday of October is the feast of Our Lord Jesus Christ the King, a first class feast with white as the liturgical color.

The calendar used in the Novus Ordo is a story for another time, but I will simply highlight the two major changes. First, the season of Septuagesima has been deleted completely. Second, the Sundays after Epiphany and after Pentecost are collectively known in Latin as Dominicae per annum (“Sundays of the year”). In English, they have been given the repulsive title of “Ordinary Time.” No time of year is ever “ordinary,” because we have been given the extraordinary privilege of offering the Holy Sacrifice of the Mass!

The second calendar used by the Church is the proper of the saints or proprium sanctorum. This consists of feasts of our Lord, our Lady, and the saints. Each feast in the proprium sanctorum is designated first, second, third, or fourth class. The first class feasts are as follows:

In addition, the feast of the patron saint of a place is observed as a first class feast in that place. For example, the feast of St. James the Apostle on July 25 is a first class feast in the Archdiocese of Seattle, because St. James is the patron saint of Seattle. The second class feasts are the other feasts of our Lord and our Lady, as well as the feasts of the apostles and evangelists. Most other feasts of saints are third class or fourth class. Saints are usually celebrated on the day that they died, because that is the day they entered the Kingdom of Heaven and became saints. The Gloria is sung at Mass on all feast days except those of the fourth class. The liturgical color for most feasts of a joyful nature is white. For feasts of martyrs (including all apostles and evangelists except St. John) and feasts of our Lord's Passion, the liturgical color is red.

When a Saturday is a fourth class feria, it is known as a Saturday of our Lady. The Mass and Divine Office are a celebration of the Blessed Virgin Mary. The liturgical color is white, and the Gloria is sung at Mass.

There will usually be something to observe on any given day from both the proper or the time and the proper of the saints. Some days might have multiple observances from the proper of the saints. Generally, the feast with the higher rank is observed. However, there is a complex set of rules governing what is celebrated, what is commemorated, and what is left out. To make things easier, a booklet called the Liturgical Ordo is published every year, listing what is observed on each day. Pictured below is a page from the 2018 Liturgical Ordo published by the Priestly Fraternity of Saint Peter. (Click on the picture to make it larger.) As you can see, today, July 1, is the feast of the Most Precious Blood of Our Lord Jesus Christ. Reading from left to right, it is a first class feast, the color is red, the Gloria and Credo are sung at Mass, the Preface is that of the Holy Cross, there is no commemoration of the Sixth Sunday After Pentecost, and, in the Divine Office, Vespers this evening is the second Vespers of the Precious Blood. 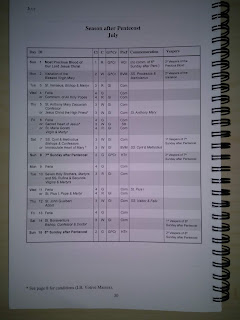 All this is to say that, over her two thousand year history, the Catholic Church has accumulated a lot to celebrate. There are celebrations of Jesus Christ, the Blessed Virgin Mary, thousands of saints, and more. The Church does not wish to neglect any of her many feasts. Thus, we have this carefully constructed liturgical calendar to ensure that no celebration is unjustly neglected.