Liturgy of the Traditional Mass, Part 11: The postcommunions and the end of the Mass

Previous parts in this series:
Part 1: Introduction to the Traditional Latin Mass
Part 2: The Asperges and the Prayers at the Foot of the Altar
Part 3: The incensations, Kyrie, Gloria, and collects
Part 4: The Epistle, Gospel, and what occurs in between
Part 5: The Nicene Creed
Part 6: The Offertory
Part 7: The Preface, Sanctus, and beginning of the Canon
Part 8: The rest of the Canon
Part 9: The Our Father, the breaking of the Host, and the Agnus Dei
Part 10: Communion

Having read the Communion verse, the priest kisses the altar and turns to greet the people in the usual way.

In each of the three major actions of the Mass, the Church has prayers proper to the occasions being observed and to her other intentions. Toward the beginning of the Mass, when we were preparing to offer the sacrifice, the collects were sung. At the Offertory, when we were making our initial offering to God and entering into the true sacrifice, the secrets were said. Now that we have received Communion, the priest sings the postcommunions to give thanks to God for all he has given us in the Mass and to ask for his grace as we go back out to the world. Postcommunions follow the same format as collects and secrets, concluding with a short doxology and mention of the Trinity. Then, the missal is closed. Like the veiling of the chalice, our exit from the solemn liturgy is marked by closing and covering things, in reverse of when we entered.

The priest once again returns to the center, kisses the altar, and greets the people. In all this, the three ministers move together, with the priest at the top of the steps, the deacon in the middle, and the subdeacon on the ground. How they are standing shows precedence. The priest is superior to the deacon, who is superior to the subdeacon. The way they move together also represents the Trinity and its three equal persons. Though unequal, the ministers are in a category separate from others present. After the priest has greeted the people, the deacon turns and sings the dismissal. It is usually sung to an elaborate melody.

This is one of the most difficult texts in the Mass to translate and interpret. Often, it is simply rendered, “Go, the Mass is ended,” but there is far more meaning than that. There is also considerable debate as to the origins and meaning of this phrase. It has its earliest origins in the dismissals of meetings of the Roman Forum and has been part of the Mass from the earliest centuries. It literally means, “Go, it is the dismissal.” The Latin word “missa,” here meaning “dismissal,” is also the word for “Mass,” and some believe that the word for “Mass” originates from the phrase, “Ite Missa est.” There is a popular theory that the word “missa” came to imply a mission. After devoutly assisting in the Mass, the faithful are sent forth into the world to carry on Christ's mission (Mark 16:15-20). Although this probably is not the actual historical origin of this phrase, it is still a good reminder of what we are sent to do as we are dismissed from the Mass. Illustrated below are the priest, deacon, and subdeacon in a semicircle. The priest and deacon are both turned to the people while the deacon sings, “Ite Missa est.” The subdeacon remains facing the altar. A server holds the book containing the chant melody for the deacon. 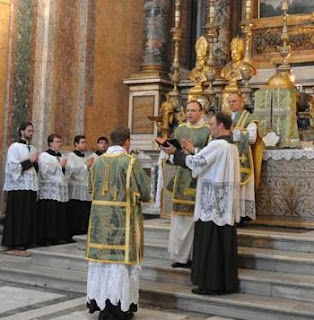 Until 1962, whenever the Gloria was not sung, such as in Advent and Lent, “Ite Missa est” was not sung. During these times, we do not wish to be dismissed, but rather to remain keeping watch with Christ. The Church desires, then, not a grand sending forth, but rather a more subdued dismissal, which the deacon sings facing the altar.

We ought to bless the Lord always in our lives, but Holy Mother Church sings this because she wishes to remain with her spouse, the Lord, and keep watch until all is accomplished at Christmas or at Easter, when “Ite Missa est” is sung again. This beautiful tradition was discontinued in the 1962 Missal, which directed that “Ite Missa est” always be used unless some other liturgy immediately follows the Mass.

Whether the deacon sings “Ite Missa est” or the lesser “Benedicamus Domino,” the choir responds to the same melody, “Deo gratias.” Indeed, thanks be to God for all he has done for us, for the immeasurable grace given us in the Mass! What other remark could we make at the thought of exiting the Mass, after the amazing things that have just happened? Thanks be to God for the perfect sacrifice that we have offered and the most Blessed Sacrament that we have consumed. As we go out, we will still give thanks to God with our lives, doing his will. At Easter, the most glorious feast of the year, the Church further exclaims her jubilation by adding “alleluia, alleluia” to both the dismissal and its response.

At Masses for the Dead, neither “Ite Missa est” nor “Benedicamus Domino” are sung. In their place, the Church makes one final prayer for her suffering members. Thus the deacon sings to a simple tone.

This is the origin of the acronym “R.I.P.” and is always sung in the plural, for just as every Mass involves the whole Church, a Mass for the Dead always remembers all the Church Suffering, perhaps with special emphasis on a particular person. Because it is a sorrowful prayer, the response is not, “Deo gratias,” but rather, “Amen.”

Even when we are dismissed with “Ite Missa est,” the Mass does not end quite yet. The following ceremonies appeared as private devotions during the Middle Ages and were not prescribed in the missal until 1570. The priest turns back to the altar and bows down to whisper one final prayer.

Just as the Mass began with an invocation of the Trinity, so it ends in this prayer addressing the whole Trinity together. Here, the priest makes his last supplication for acceptance of his worship and sacrifice. Once again, he prays for reception of the graces attached to Holy Communion. Nothing new is introduced in this prayer; it a sort of epitome to close the Mass. As with every prayer, it ends, “Per Christum Dominum nostrum. Amen.”

As the faithful are sent out, the priest blesses them on their journey. A blessing is the dedication of something or someone to a sacred purpose. When confered on a person, it has the effect of assisting personal devotion and giving actual graces. God blessed the human race at the beginning of time, and he did the same with Noah and Abraham (Genesis 1:22, 9:1, 12:1-2). Priests of the Old Covenant blessed the Israelites (Numbers 6:23-27). In the New Covenant, one of the purposes for which priests are ordained is to give blessings.

The priest first raises his eyes to God, whose blessing is being given, and says the first part, “Benedicat vos omnipotens Deus.” The priest then turns to the people and blesses them with the Sign of the Cross, saying, “Pater, et Filius, et Spiritus Sanctus.” Thus, we are blessed in the name of the whole Trinity.

Because a bishop has the fullness of the Holy Orders and full apostolic authority, he gives a more solemn blessing than a simple priest. A bishop sings the blessing, whereas a simple priest says it aloud. In addition, a bishop makes three Signs of the Cross.

Finally, throughout the Middle Ages and earlier, the faithful had great devotion to the beginning of the Gospel according to St. John, which beautifully describes the Nativity and the Incarnation of Jesus as the Word made flesh. Often times, as a private devotion, priests would bless people with this passage from the Gospel. It also became part of the private prayers said by the priests after Mass: a fact still seen in a Pontifical Mass, when it is recited as the bishop leaves the altar. From this devotion grew the custom of reading this Gospel passage at the end of Mass as the “Last Gospel.” The origins of the Last Gospel as a private devotion are evident in the lack of any real ceremony to it. It is said, not sung, and no incense is used.

All genuflect at the words, “Et Verbum caro factum est,” when the Incarnation is mentioned, just as all genuflect at the words, “Et homo factus est,” in the Credo. The Last Gospel being completed, Holy Mother Church's greatest act of worship to God, the Holy Mass, is now finished. The sacred minsters descend the steps of the altar, cover their heads with the birettas, and exit with the servers.

Email ThisBlogThis!Share to TwitterShare to FacebookShare to Pinterest
Labels: Liturgy of the Traditional Mass